When the currency shifts between two parallel trend lines, the trading channel is created. In order to create a channel, you must depict the primary trend line, above the highs for a downward trend or below the bottoms for an up-trend. Connecting at least 2 subsequent highs draws a downward straight line. It can be used to demonstrate profit opportunities received during a trend.

A channel is effectively working in two trend lines, which are depicted parallel to each other, the lower line acting as the support, and the higher line as the resistance one. It can be upward, downward, or sideways, as other trends channels. In an up-channel, the support line is the most essential trend line, in a-down channel the resistance line is the most essential.

As a rule, the support and resistance lines in a channel are tested in turn, though this is not very important for the existing trend channel. They say a new trend is being developed if the price bursts out of the channel. The new trend can be short or medium-term. It depends on the momentum and inconstancy of the market.

Example of the uptrend "channel" 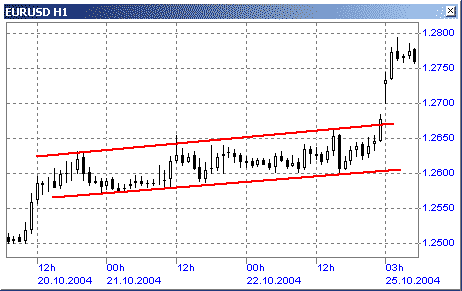 Example of the downtrend "channel" 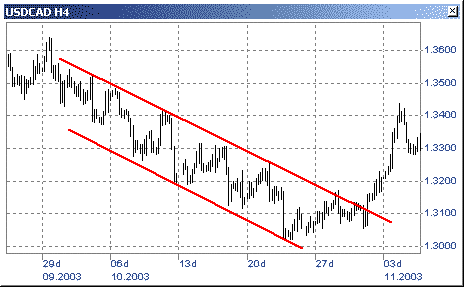 The range, or horizontal channel, is characterized by the absence of a strongly pronounced uptrend or downtrend trend of an exchange rate. At the range, channel prices fluctuate in a range of the average value.

Strategies developed for the uptrend and downtrend channel are applied as well for the lateral channel, which sometimes simply named as trading range.

Example of the "trading range" 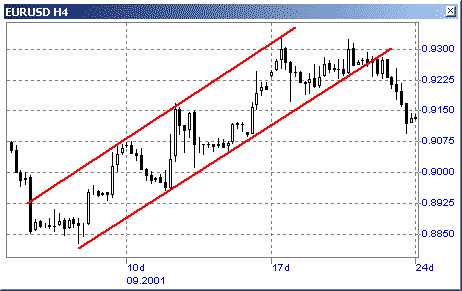