To build a Fibonacci Arc, the position of two extreme points must be set. This is done by drawing a trend line between the two points. This line can be drawn from the lowest cavity or gap, to the highest peak on the chart. Then three arches are created with the center arch falling at the second extreme point. The arches should be drawn at the Fibonacci levels of 38.2%, 50% and 61.8%.

A Fibonacci Arc is considered to demonstrate the potential levels for support and resistance. Generally, Fibonacci Arcs and Fans are both drawn on the chart at the same time. This allows the levels of support and resistance to be defined by the points where these lines cross. It should be understood, that the points crossing the arches from a price curve can vary depending on the scale size of the chart. But, because the arch is a part of a circle, its form is always constant. 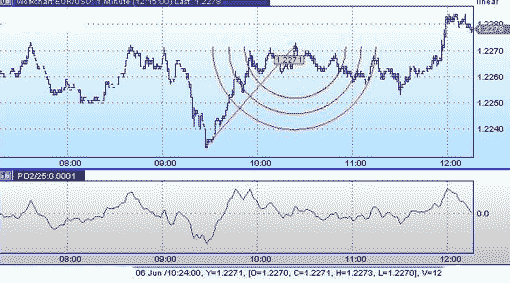 Simply put, Fibonacci Arcs are constructed by first drawing a trend line between the two most extreme points on the chart. For example, the trend line should be drawn from the lowest gap to the highest opposing peak. Then, three arches are drawn with the second arch centered around the second extreme point.

The radius' of these arches represent the distances along the trend line in proportion to it's length and are equivalent to the Fibonacci levels of 38.2%, 50.0%, and 61.8% on the chart. By interpreting the Fibonacci Arcs, you are able to anticipate the support and resistance as prices approach the arcs.

The following chart will illustrate just how the arcs can supply information on support and resistance. The most common technique is to display both the Fibonacci Arcs and Fan lines together in order to anticipate the support and resistance at the points where the lines intersect. Remember that because the arcs are circular in relation to the chart axis, the points at which they cross the price date will vary depending on the scale size of the chart.