The graphic tool, The Fibonacci time interval, is a set of vertical lines that are drawn from each other on time intervals, which correspond to the numbers of Fibonacci's sequence. Fibonacci Time interval is the tool of the forecast because, according to a popular belief, the most significant market events occur through the time intervals corresponding to Fibonacci numbers. 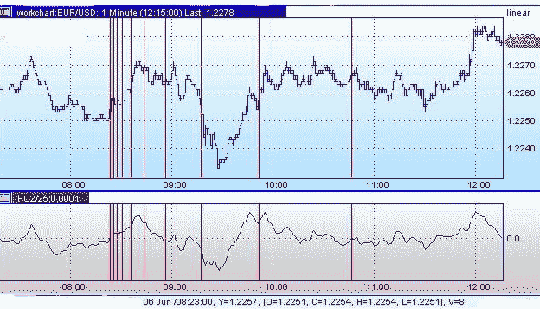 Interpretation of Fibonacci Time Zones involves looking for significant changes in price at or near the vertical lines. Time Zones are most applicable to a long-term analysis of price action and are probably of limited value when studying short-term charts.

Inexperienced users of Fibonacci Studies should consider this type of analysis only when viewing charts that span multiple years. In the example charted on the next page, Fibonacci Time Zones were drawn on the Dow Jones Industrials beginning at the 1982 market bottom. 238 AIQ TradingExpert Pro Reference Manual On the chart, you can see that significant changes in the Dow occurred on or near the Time Zone lines.