One use of technical analysis is to derive "support" and "resistance" levels. The underlying idea is that the market will tend to trade above its support levels and below its resistance levels. A support level indicates a specific price level that the currency will have difficulties crossing below. If the price repeatedly fails to move below this particular point, a straight-line pattern will appear.

Resistance levels on the other hand, indicates a specific price level that the currency will have difficulties crossing above. Recurring failure for the price to move above this point will produce a straight-line pattern.

Support can be defined as the level from which prices have fallen to, made a dip in the market, and then retraced. The reverse is true of resistance levels where price have risen to, made a peak before retracing back to the downside. The more often retracements happen at or around key levels the stronger the support or resistance level becomes.

In psychological terms, these levels work because buyers or sellers remember that there was a sharp reaction from the same level last time it was seen. Therefore, at a support level, sellers are tempted to take profits, new sellers are reluctant to take positions, and buyers are keen to enter the market.

A support is a price level, which is deemed attractive by buyers of that currency, therefore preventing sellers from lowering the price below it. A support level is usually identified once the market tests that level more than once before breaking below it (broken support) or moving up and away from it (maintained support). A recurring failure by the market price to move below the support level usually results in a pattern that can be traced by a straight line.

Support levels are sometimes used to determine good buying opportunities, since the currency may be supported by that level and the currency's price may appreciate again after testing it.

A resistance level shows a trend line whereby the sellers of that currency find those prices along the line more attractive to sell and therefore prevent the buyers from raising the price further.

On the other hand, in a rising market, once the trend line for a resistance level is broken, it could turn into a support. 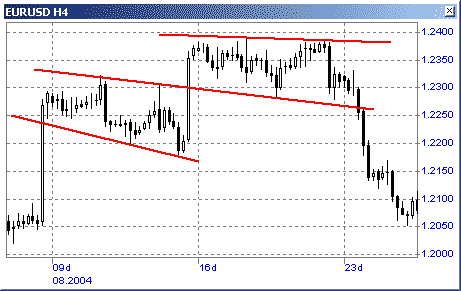 Support and resistance levels take on an added significance when used in conjunction with momentum or relative strength, the latter two factors giving a good indication whether a particular level will hold or be broken.