Candlestick charts basically convey the same type of information represented in bar charts, but are visually displayed differently. The Open, High, Low and Close of the chosen trading period will be represented in a single candle.

Historically, candlestick charts are the oldest form of charts that have been used for predicting prices. They have been in use since the 1700's in predicting the prices of rice. During this era in Japan, Munehisa Homma became legendary by making a fortune in the rice trade using candlestick analysis. He is said to have performed over 100 consecutive winning trades with this method.

The Japanese even gave the candlesticks and the shapes they formed colorful names. During this time, the Japanese feudal system was under a military environment and names such as "counter attack lines" and "advancing three soldiers" were applied to candlestick formations. While strategy, psychology and skill are important characteristics for battle, they are also important characteristics for anyone in the midst of a trading battle.

A candlestick chart is much more appealing visually that the standard bar charts. However, both charts require four elements for contruction, the Open, High, Low and Closing prices for any given period of time. Below are several examples of candlesticks and a definition for each of the components.

The body of a candlestick is referred to as the real body and it represents the range between the opening price and the closing price. 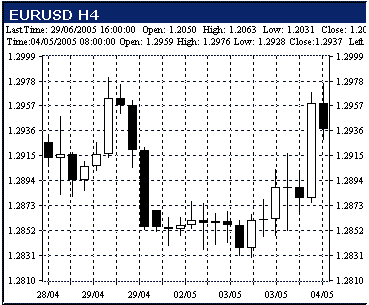 This type of chart is used to represent each time period in a candlestick format. Just like with a bar chart, the candlestick chart will display the Open, High, Low and Close of a chosen period of time. Candlesticks can be either solid or transparent, depending on the similarity of the opening and closing price. When the closing price is higher than the price at the open of the market, the candlestick will be represented as transparent or empty.

If the market price closed lower than what it opened at, the candlestick will be solid or filled in. Two lines that extend vertically above or below the real body of the candlestick, represent the highs and lows during the time period, but do not reflect the closing price. These lines are referred to as shadows with the upper shadow representing the highest prices and the lower shadows indicating the lowest prices.

- They are more "visually immediate" than standard bar charts. After you get accustomed to reading them, they make it much easier to see exactly what occurred during the specific time period.

- When using a bar chart, you have to fill in the price actions mentally. Since candlesticks are either filled in or transparent, you no longer have to waste time figuring out what actions the prices took during the time period.

- Candlestick charts allow you to quickly spot trends in market prices by simply observing the color and you can easily see what the stock did during the time period.

Most importantly, candlesticks provide a vital way to spot reversals. These reversals are generally short term changes that are exactly the type of change that swing trader's watch for. When a traditional technical analysis talks about reversals, it is usually referring to formations that occur over a long period of time. Common reversal patterns include the "double top" and the "head and shoulders" patterns. And, by definition, these reversals involve smart money that is distributing their shares to more naive traders, the process normally take weeks or even months to occur.

Candlesticks are also able to pick up on any changes in market trends that occur at the end of each market swing fairly accurately. They will often warn you of any impending changes if you pay close attention to the chart.