How does one calculate the A/D Line correctly? It is a running total of advancing stocks minus decreasing stocks. A/D Line has been created for gauging the market's strength. It says that as long as there are more advancing issues than decreasing issues, the market is in strong position. As well as the stock index is a compound of stock prices the A/D Line is a compound of stock fluctuations. That is why A/D Line is declining every day much quicker compared to the weekly trend and the indices based on prices. There is a tendency of having the same number of so-called "up days" and "down days." In addition, the foregoing trend is a result of the average stock. However, the profit finally starts to increase more quickly than the losses. 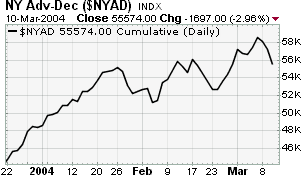 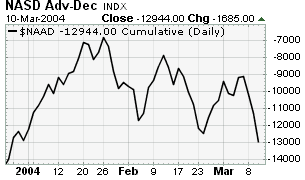 In many cases, it is possible to forecast the bull market's end when the A/D Line starts to round over even when the DJIA is trying to reach new peaks. Usually when a discrepancy between the DJIA and the A/D Line is growing, it means that the DJIA has changed its direction and moved towards the A/D Line.