The Average True Range is an indicator of volatility. It was developed by J. Welles Wilder in 1978. As well as the many other indicators, first it was created for the commodity markets - which are more unsteady than shares - and for the prices at the end of the day. Nowadays, it is widely used in the forex market and on other periods, too. 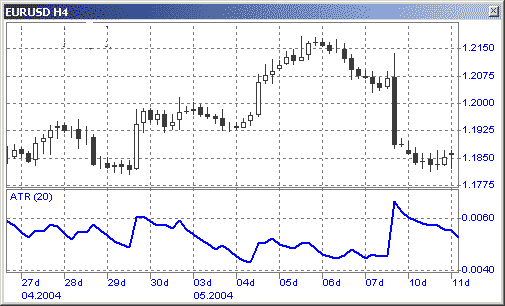 As a rule, ATR with 14 periods is used. It is calculated both on a one-day basis, and on daytime or week and even monthly basis. Extreme values of the indicator often define reversal points or the start of a new fluctuation.

Average True Range cannot predict a duration or direction of changes, as well as other volatility indicators. It specifies only an activity level. The indicator's low level, points out quiet trade in a small range, while high values, points out intensive trade in a wide range. The long period of low ATR points out integration, which, most probably, will result in fast continuation of changes or a turn.

High values of ATR usually are the result of quick fluctuations and seldom stay like this for the long period. As ATR indicates absolute volatility value, currency pairs on Forex with the low prices will have with other things being equal lower ATR and on the opposite. The main notion of this indicator states, "The smaller is the indicator's value the more poor a trend direction is; the higher the indicator's value is, the higher possibility of a turn of a trend is."

During a long period of ATR can be late, specifying not ongoing but previous inconstancy.