Ichimoku Kinko Hyo is translated from Japanese as "Chart Equilibrium at a glance. It is a charting technique created by Goichi Hosod, a Japanese journalist, who took the nickname of "Ichimoku Sanjin" before the World War II.

Ichimoku Kinko lets indicate in which direction the market is moving, its entry, and exit points. It is used for determining of a market trend, support and resistance levels and for creating sale and purchase signals.

Kijun-sen demonstrates the average value of the price for the second period of time. Kijun-sen is a fluctuations' parameter in the Forex market. The price can grow if it is higher than the Kijun-sen. When the price crosses this line, movements in the trend are predicted. Another variant of the Kijun-sen usage is the submission of the signals. Kijun Sen resembles the Tenkan Sen but consists of more than 26 periods. (Brown)

Tenkan-sen demonstrates the average value of the price for the first period of time; defined as the sum of a maximum and the minimum for this time frame, divided by two. The purchase signal is provided when the line Tenkan-sen intersects Kijun-sen bottom-up and a sell signal is generated when the Tenkan-sen crosses Kijun-sen top-down. Tenkan-sen is used as the indicator of a Forex trend. The trend exists if this line grows or falls. When it moves horizontally, the Forex market has come into the channel. Tenkan Sen is an average of the highest high and lowest low over 9 periods. (Red) There is a signal for selling when Tenkan-sen line crosses Kijun-sen from bottom-up, the purchase signal is provided, if it moves from top to down.

Tenkan-sen is used as the indicator of a market trend. If this line grows or falls - the trend exists. When it goes horizontally - the market has entered in the channel.

Senkou Span is a shaded region between the 2 Senkou lines.

A cloud is the distance between the lines, Senkou, is shaded on the schedule with other color. The market is considered without a trend and the edges of a cloud will derivate levels of support and resistance if the price is placed between these lines. If the line, Chinkou Span, crosses the chart of the price from bottom upwards, it is a signal for purchasing. Moreover, it is a signal for selling if it crosses from top downwards. Chikou Sen: the lagging price, 26 periods ago. (Pink) 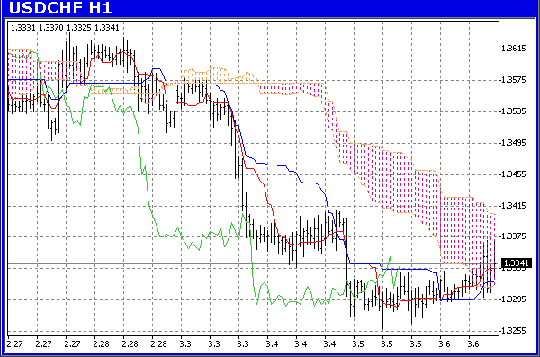