Both MFI and volume go up. It means that more players are joining the market (volume increases), these players make bar development possible. Movement commencing and taking higher speed follows it.

Both MFI and volume go down. In this case, the participants have lost their interest.

MFI rises while volume gets lower. This situation describes lack of ability for market to support the volume from customers. In this case, the price varies according to the speculations of traders, brokers, or dealers.

MFI decreases while volume rises. This situation is called the battle between bulls and bears. In this case, the volumes being bought or sold are considerable whether the price does not change much as far as the affecting forces are approximately at the same level. It is inevitable that either bulls or bears will win. In most cases the end of this process lets you see whether the trend is going on or it is about to change. According to Bill Williams, it is called "curtsying." 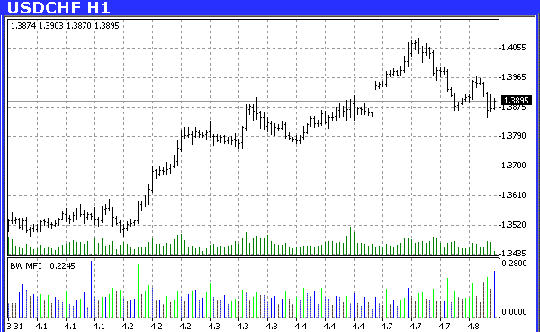 The calculation for the MFI is:

Otherwise, a "Fake" is considered to occur when the volume gets lower whether MFI increases. It is called like this as far as there is no basis for trend changing apart from rising floor activity. Finally, the price reverses.

The process of both MFI and volume falling is called a "Fade." In this case, the market is not interested and it causes a fade. The price trend is supposed to reverse.

Unlike the low MFI, when the volume is high, it is called "Squat." This can be compared to a sprinter crouching before the race start. Further changes are proved future trends.

In case both volume and MFI are up, then it is called "Green" and it gives a reliable indication of following the trend.