The MA indicator (Moving Average indicator) is one of the oldest technical modern indicators and the most often used indicator in technical analysis.

A moving average is an average of a shifting body of data, as seen from its name. For example, a 10-day moving average is got by adding closing prices for the last 10 periods being measured and dividing by 10. The term "moving" is used as only the last 10 days are used in the measurement. That is why the data body is averaged shifted forward with every next trading day. 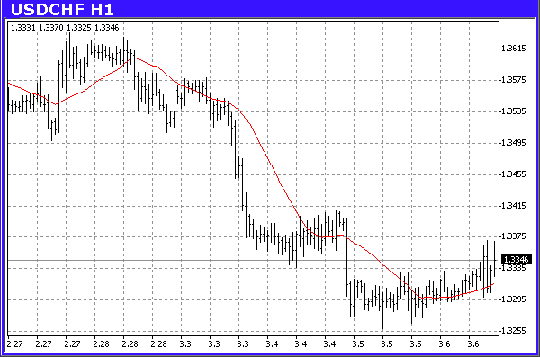 Moving Average demonstrates the average value of a security's price in a time frame. The average price shifts up or down when the security's price shifts. There are 5 popular types of moving averages: simple (or arithmetic), variable exponential, weighted, and triangular. You can measure moving averages on any data series comprising a security's open, volume, high, low, close, or any other indicator. The basic distinction between MA variants is the weight, which refers to the latest data.

By placing a short-term moving average (2-10 days) of oscillating indicators such as Stochatics, the 12-day ROC or the RSI whipsaws can be reduced, at the expense of slightly later signals. For instance, it is possible to sell only when a 5-period moving average of the Stochastic Oscillator moves below 80 rather than selling when the Stochastic Oscillator falls below 80.