The Parabolic SAR (Stop and Reverse) is a system of defining the point of trend's turns; The Parabolic SAR (PSAR) indicator is based on the link between a Forex market's price and time. The basic goals of the Parabolic System are to make reverse orientation of trading positions when the ongoing trend turns. The indicator is called like that because when charted, the pattern resembles a parabola or French curve. 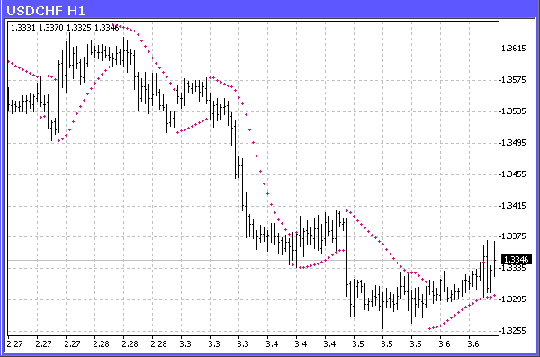 The closing price level is measured like this (for short positions):

The closing price level is measured like this (for long positions):

AF is the acceleration factor. Step is the step of the closing price changing. Define the speed of shifting the closing prices to the direction of opened position. This value depends on amount of new maximums from the moment of opening if long positions and amount of minimums form the moment of opening the short position. For the first period, the AF value is set to 0.02. It means that the closing price is shifting on 2% from the distinction between the extremum point of the previous period and the current price of closing of position. The limiter value of AF is 0.2.