The QStick indicator was introduced by Tushar Chande as the candlesticks' quantifier. It is a moving average that shows the difference between the prices at which an issue opens and closes.

Any candlesticks charting agrees that the candlestick is black in case the period closes lower than it has opened and white when the closing price exceeds the opening one. A long appearing of white candlesticks is thought to show the bullish market whether a row of black ones describes the bearish. 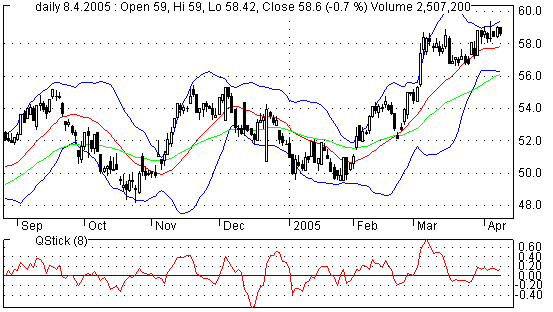 Calculation: The QSticks simply builds a moving average for n-periods that would show the difference between close and open prices.

Where n is the amount of periods for calculation of moving average.

You can simply use QStick as candles substitution. In case most of the candlesticks of the period are white then QStick takes positive values, whether dominating black candles turn QStick into negative values.

QStick can give lots of informative trading signals. Extremely low values of QStick along with reversal tendency give a buy signal. Qstick being at its summit and starting reduction is a sell signal. In case the figures of QStick differ much from prices, it is a sign to follow the Qstick direction to forecast price trend.