The Stochastic Oscillator is an indicator of speed of changing or the Impulse of Price.

where N - is the price of closing of the current period,

LLV(n) - the lowest price within the last n periods,

HHV(n) - the highest price within the last n periods,

s - amount of periods of calculation of the moving average. 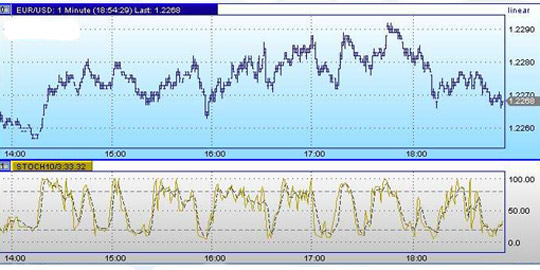 It demonstrates the moments, when the price reaches the border of its trade diapason within predefined time period. It comprises 2 curve lines - the slow (%D) and the fast (%K). The Stochastic Oscillator also comprises 4 variables. They are the following:

One method when trading using the Stochastic Oscillator is to sell when the either line rises above 80 and then falls back below. Vice versa, purchase when either %K or %D decreases below 20 and then again reaches that level. Another way of action is to watch timing trades and to sell when the %K line shifts below the %D line and purchase when the %K line shifts over the %D line.

Besides, you should always follow the discrepancies. For instance, if prices start reaching new peaks and the Stochastic Oscillator fails to surpass its previous peaks, the indicator usually demonstrate in which direction prices are moving.

As a rule, they use the following interpretation of the indicator:

The presence of discrepancy is when, for instance, the prices have reached new highs, and the values of oscillator turned out to be too weak for reaching new peak values.