As well as a momentum indicator, TRIX (the Triple Exponential Moving Average) is an oscillator, which follows overbought and oversold markets. For that watch a negative value demonstrate an oversold market and positive value to demonstrate an overbought market. When TRIX is used as a momentum indicator, a negative value suggests momentum is decreasing while a positive value suggests increasing momentum. Some analysts think that the TRIX crossing above the zero line is a purchase signal and a closing below the zero line is a sell signal. Distinction between price and TRIX can also show important market turning points. 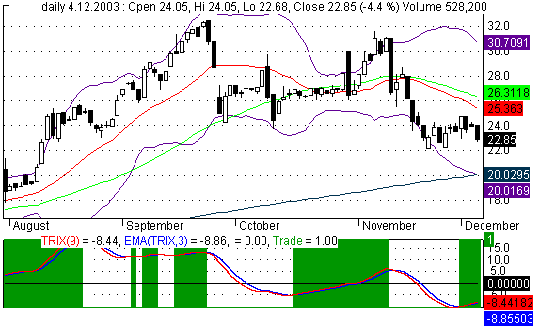 TRIX filtration of market noise and its tendency to be a leading and not a lagging indicator are two advantages of TRIX over other trend indicators. Insignificant cycles are excluded by using triple exponential smoothing. It is able to lead a market as it calculates the distinction between each bar's smoothed version of the price information. TRIX is best used together with another market-timing indicator so as to reduce false signals when used as a leading indicator.