Anytime that the demand for currency exceeds the currency offered, the exchange rate on Forex grows. On the other hand, if the volume of currency for sell is less than the volume that participants are seeking to buy, the market rate falls. When the demand lasts for a long time, it causes a rate in growth and will lead to the market being saturated. From the time that offers exceed demand; the sales are decreased in rate.

Trend corrections are the movements that are directed against the direction in which the previous trend was headed. This movement doesn't surpass the previous trend. A trend is considered a phenomenon that will return prices to a correct channel and does not allow the movements in the market to deviate from the fundamental factors.

If participants will open long positions and when satisfied by the increase of an exchange rate sell with a purpose of profiting quickly, it is called an ascending trend. But, if the principal factors that have resulted in an increase in the demand for currency have not changed, it renews the buying of currency and increases the rate. Then that particular movement takes a direction.

There are two kinds of trend: ascending and descending trend.

Ascending trend - An ascending trend is any period in which exchange rates reach a higher value when compared to the previous rate. It's an upward gain in rates from the rate before it.

Example of an ascending trend 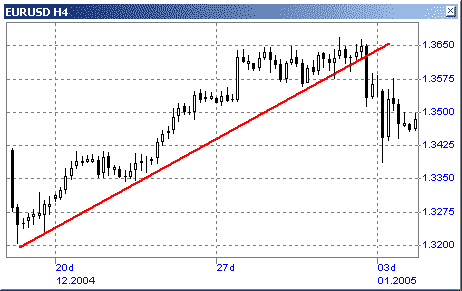