Indicator of Bollinger borders consists of two lines. They are placed on the equal distance to definite amount of usual discrepancies. While the value of standard deflection depends on the price unsteadiness, the lines automatically control their width. The width increases if the market is more volatile; it decreases when the market is somewhat steady.

Here are the features of Bollinger's lines:

The lines of Bollinger resemble the Envelopes Moving Averages indicator. The basic distinction between these indicators is that the borders of envelopes are placed over and under the line of changing average on the certain distance, which is calculated in percents, while the borders of the Bollinger lines are placed on the distances equal to definite number of standard deflections.

Bollinger Bands can help to define if ongoing data field values are behaving normally or breaking out in a new direction. For instance, when the closing price of a Forex market moves over its upper Bollinger Band, it usually increases in that direction. Bollinger Bands also helps to find out when trend reversals may happen. Usually, a reversal is when there are new peaks or falls outside of the bands and followed by another peak or fall inside the bands. 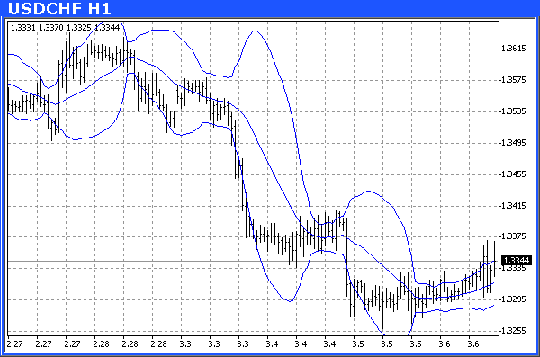 Bollinger Bands are a pair of values put as an "envelope" around a data field. To measure the values you should take the changing average of the data for a definite period and subtract or add the definite number of standard deflections for the same period from the moving average.

Bollinger Bands resemble Trading Bands and share many of their traits. However, trading bands do not differ in width based on inconstancy.