First, the Commodity Channel Index was developed as the indicator for determining of reversal points in the commodity markets. Then it became rather popular in the share market and in Forex market. Donald Lambert created CCI.

The supposition on which the indicator is based consists that all actives move under influence of definite cycles, and maxima and minima appear with definite intervals. CCI corresponds to oscillators, measuring speed of price fluctuations. The index demonstrates a deflection of the ongoing price from its average value. Lambert developed a constant at a level 0.015 that approximately from 70 up to 80 % of CCI values were between levels -100 and +100 are for the purposes of measurement.

Calculation of the Typical Price:

Calculation of the Simple Moving Average from Typical price:

Calculation of the median divergence.

Formula of the Commodity Channel Index will look as follows: 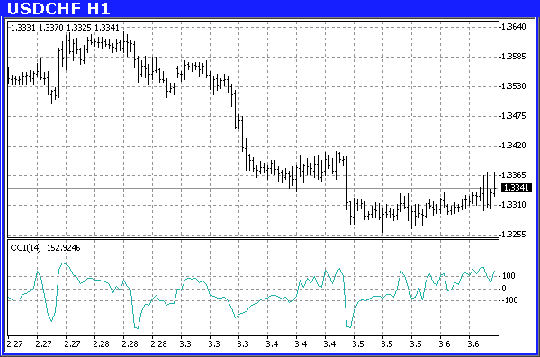 The Commodity Channel Index is moving over and under a zero mark. The percent of Commodity Channel Index values (between +100 and -100) correspond to the number of the periods used for its building. Shorter (with smaller quantity of the periods) CCI will be more inconstant and less its values will be placed in a range section between +100 and-100. Correspondingly, the greater number of periods will be used for CCI measurement, the more values percent of the indicator will be between the points of +100 and -100.

Important: The determination of the cycle's length does not depend on the Commodity Channel Index and any other tools. It is a rather many-sided indicator, which can cause a wide range of purchase or sell signals. Investors and traders use CCI to determine reversal price points. It is extreme on the price chart and trend force and its results should be used together from the rest of indicators.

How to use CCI

Here is the author's advice on the work with the CCI index in case it moves above +100 and below-100 and sends sell or purchase signals. Buy or sell signals happen 20 - 30 % of the time while from 70 up to 80 % of time Commodity Channel Index's value is fluctuating between +100 and -100. Supposedly, if CCI overcomes the level of +100 from below upwards, it means that the currency pair is moving in the direction of the strong ascending trend, thus the existence of a clear purchase signal. Once CCI goes under +100, the position is supposed to be closed on a return signal. At the same time, it is considered that if Commodity Channel Index moves to -100 point from top to down, it means that the currency pair is meeting a strong descending trend, and there is a sale signal. As soon as CCI again crosses the level of 100, this position is considered closed.

Later, CCI started to determine if the market was overbought or oversold, in order to define the reversal points. The currency pair is considered overbought once it overcomes +100 level and is oversold once CCI goes under -100 point. While CCI stays in an overbought position, which is above +100, the sale signal appears in case if CCI crosses a level +100 in the opposite direction - from the peak to the bottom. After CCI has entered into an oversold zone, which is under -100 level, the purchase signal appears when CCI crosses -100 point in the opposite direction and from the bottom to the peak.

The drawbacks of Commodity Channel Index

The CCI works effectively only in cases when the market is really subject to rather permanent cycles because it was developed definitely for the cyclic markets. That is why it is more problematic to choose an optimum period if Forex cycles are difficultly distinguished in market.

Caution: Every, even an irreproachable, indicator used wrongly results in a number of false signals and accordingly causes considerable losses in your deal. So before using any indicators on real accounts, first test their work for the demonstration account or check them as trading strategy.