The Stochastic Oscillator was developed by the president of Investment Educators, Inc., (Watseka, IL) George Lane. The main notion of Fast STO is that when prices decrease, closing prices tend to be nearer to the lower end of the range. In uptrends, the closing price moves towards the upper border of the range.

The Stochastic Oscillator consists of 2 lines - %K line and %D line that fluctuate between 0 and 100 on a vertical scale. The %K that is the main of two is depicted as a continued and unbroken line. The %D line is a moving average of %K. and is depicted as a dotted line. The Fast Stochastic is the average of the last three %K and a Slow Stochastic is a 3-day average of the Fast Stochastic. Use as a purchase/sell signal generator, purchasing when fast moves are higher than slow and selling when fast moves are under slow. 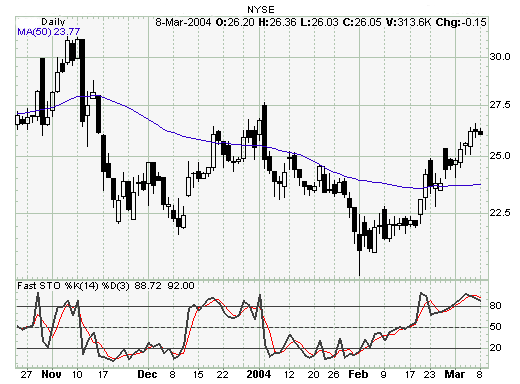