The sense of MACD, the most well known indicator, is the basis of average values variety. The idea of the difference between two averages that are smoothed exponentially (EMA) was founded and put into practice by Jerald H. Appler.

The MACD value existing at the beginning of a data series is supposed to be equal to zero. The starting values of MACD are thought to include zero as far as it is based on exponential moving averages. Under these circumstances, it is possible to omit the values before the 26th value in case the longer moving average has not got any importance yet. 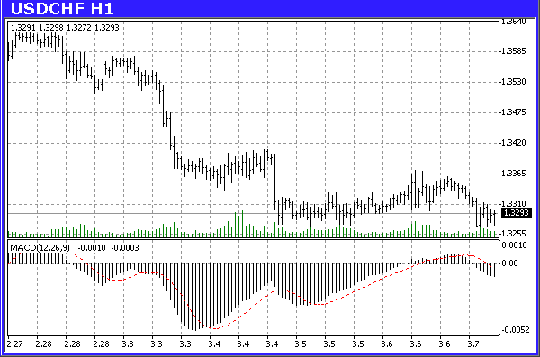 General usage of the MACD, a particular example of a Value Oscillator, is detecting price trends through forex market closing prices. In case of MACD growth, the prices go up and they go down while MACD decreases. A 9-day exponential average against what the MACD is generally traded is its signal line. This value is generated by the MACD Signal Line function. MACD increasing over the signal line makes a signal to buy. MACD falling lower the signal line produces a signal to sell.

The curves are varying at the area near zero. Standard oscillator researching methods are used in MACD analyzing. The value crossing the line shows whether to buy or sell. This indicator describes the Divergence greatly. Zero level crossings signalize a possibility of trend changing. In case it is crossed up from below, it is a buy signal; otherwise, if it is crossed downright it is a sell signal.

The process when a faster one intersects a slower line is not senseless either. In case the faster line crosses the slower line up from below, it will be considered to be a buy signal. If the situation is opposite and a faster one intersects a slower line downright it is a sell signal. The signal is developed in case of its confirmation, which is a continuing lines motioning in a parallel way towards and crossing the zero point. The basic trend confirmed by such signal is the most reliable and significant.