The Elliott Wave Theory identifies a repetitive pattern of 5 waves in the direction of the main trend. These waves are used to forecast the stock market shifts. The idea was given by the Dow Theory and by studies found throughout nature.

Price Channels were also used as a tool for arriving at price goals. It also helped confirm the finish of wave counts by Ralph Nelson Elliott.

A primary trend channel is built by depicting a main up trend line along the bottoms of waves 1 and 2 after an uptrend has been established. A parallel channel line is then depicted over the top of wave. The whole uptrend will often stay inside those 2 borders. 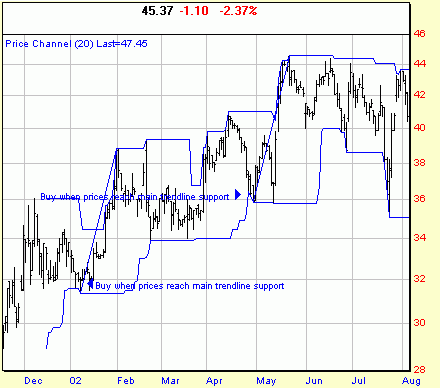 2 lines represented the Price Channel. It is based on measurement of min, and maximum prices for the definite number of periods.

The following formulas serve as the basis for the lines of the price channel:

PC Lower = LL (n). It is the minimal value from the set of all Low prices (Lowest Low) within n periods.

PC Upper = HH (n). It's the maximal value from the set of all High prices (Highest High) within n periods

The changes depend on the appearing of new max. and min. prices. The indicator's lines of are dynamic lines of support and resistance.

If wave 3 starts to accelerate to the point that it is higher than the upper channel line, the lines are depicted again along the top of wave 1 and the bottom of wave 2. The last channel is depicted under the 2 corrective waves (2 and 4) and as a rule over the high. The upper line may have to be drawn over the top of wave if wave 3 is either unusually strong or an extended wave. The 5th wave should come close to the upper channel line before ending up. It is advisable that semi log charts be employed along with arithmetic charts for the depicting of channel lines on long-lasting trends.