Michael Poulos is an inventor of the Random Walk Index. His purpose was to develop an indicator that would have a better effect than fixed look-back period and any traditional smoothing techniques. The basis of RWI is a theory of the shortest path from one point to another. In case the prices stay too far from the line traced for a period, then the movement efficiency is considered to be minimal. Highly random movement creates considerably fluctuating RWI.

The number of periods, recommended by Poulos for effective RWI applying is from 2 to 7 for the short-term, whether the long-term requires from 8 to 64 periods. It is done to show the short-term fluctuations and long-term trends. RWI peaks in the short term indicate with the price highs, whether its bottoms describe prices decline. 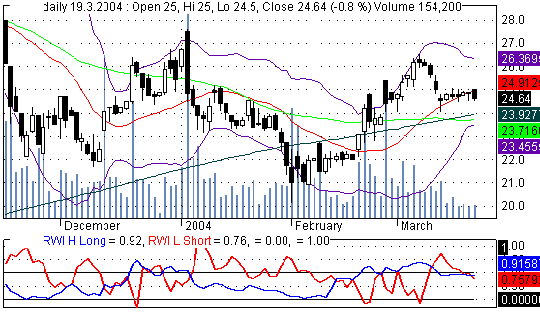 Long-term analysis describes RWI peaks exceeding 1.0 as an indication of a reliable uptrend. Stable downtrends are shown by RWI taking low values over 1.0.

RWI is the ratio of actual price trending to a random walk. In case the move exceeds the latter along with the present trend, the index is to exceed 1.0.