The Rate of Change indicates the margin between the present price and the previously existed one from n-time periods ago. ROC increases when the prices trend up whether it declines when they trend down. The scale of the prices changes calls the corresponding ROC change.

Overbought or oversold at the short- and long-term periods are perfectly shown by the 10-day ROC. The more security is supposed the higher the ROC is though the ROC decline shows the approaching rally. This indicator should be monitored during the trade in order to find out the start of the market changes. The current trend may go on in case the overbought or oversold indicators take dramatic values and the overbought market may keep its trend for a while as well. 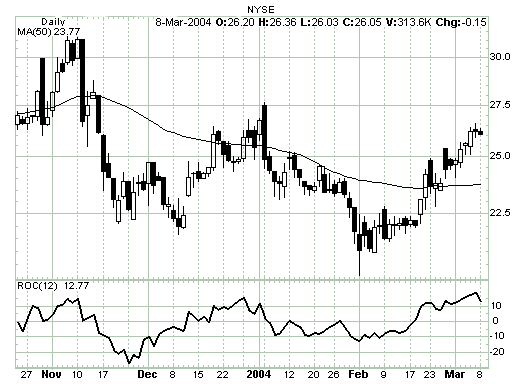 Pi - the price of the current period,

Pi-n - the price of the period, which is located n periods back from the current one.

As usual, they use the relative (in percentage) value of the velocity of the ROC:

A 10-day ROC tends to oscillate in a fairly regular cycle. Often, price changes can be anticipated by studying past cycles of the ROC and applying the predicted pattern to the current market.

To construct a 10 day rate of change oscillator, the latest closing price is divided by the close 10 days ago:

Taking into consideration the fact whether the As Percent parameter is chosen the Rate of Change can be equal either to the Change in Value function or to the Percent Change in Value function. Despite these variations, the function gives the information of the data volume changes that have happened during the certain period. The easier graphing of the Percent Rate of Change value is reached by its multiplying by 100.

The Price Rate-of-Change indicates the margin between the present price and the previously existed one from n-time periods ago. Its values can be represented in points as well as in percents. The same data, though, incarnated as a ratio, is shown by the Momentum indicator.

The sinusoidal motion of the security prices first rising and then declining is a common fact. The resistance of the bulls and bears cause the expectations to change, which is the reason for the wave-like pricing.

The ROC measures changes in prices amount during the certain time and represents it as an oscillator showing the cyclical movement. The ROC increases along with the prices up trending and it decreases when the prices go down. High prices changing give the according significant ROC changing.

Various periods of time are applied for the ROC calculation. They are from the daily volatile chart that is taken of 1 day to the long period lasting up to 200 days and even more. The 12-day ROC and 25-day ROC are the widest spread for trading at short and medium periods. Gerald Appel and Fred Hitschler have offered these periods in their book, "Stock Market Trading Systems."

Short- and medium-term oversold or overbought are perfectly shown by the 12-day ROC. The security is supposed to be highly overbought if the ROC is high, whether a rally is expected in case the ROC is low. Waiting until the market turns up or down is not always the best way out, as far as an overbought market keeps its trend for a while. Moreover, high overbought or oversold figures mostly show the present trend to keep its positions.

The back and forth cycles are quite common for the 12-day ROC. That is why the prices can be forecasted by analyzing recent cycle movements.